Discovery Sport & Range Rover Evoque fuel economy and CO2 figures quoted on this website are based on European testing. Australian figures are expected to be available early 2021.​

To enable us to show drive away prices, please select your state.

Sailing the Whitsundays with George Gregan

Former Wallabies captain George Gregan is an Australian sporting legend with a thirst for adrenalin and adventure. When invited on a fun weekend away George had no hesitation in packing his Land Rover Discovery Sport and heading for the airport, destination far north Queensland.

In the Whitsunday Islands he met up with Julian Griffiths, skipper of The Boatworks Extreme 40, and jumped on board to join the crew for Airlie Beach Race Week to see if his rugby captaincy skills could be transferrable to boat captaincy.

After hijinks on the high seas, George then jumps in a light plane to soak up stunning aerial views of the spectacular region, and rounded out his weekend by joining Whistsunday Jetski Tours for an afternoon of hunting the whitest beaches he could find.

With an action-packed few days to his name it was a smiling George Gregan who checked into his flight, loading luggage and new memories into his Land Rover Discovery Sport upon touchdown back in the big city.

Want to recreate this adventure for yourself?

Get the itinerary now and find out how or click on the map to view it in full screen.
DOWNLOAD ITINERARY 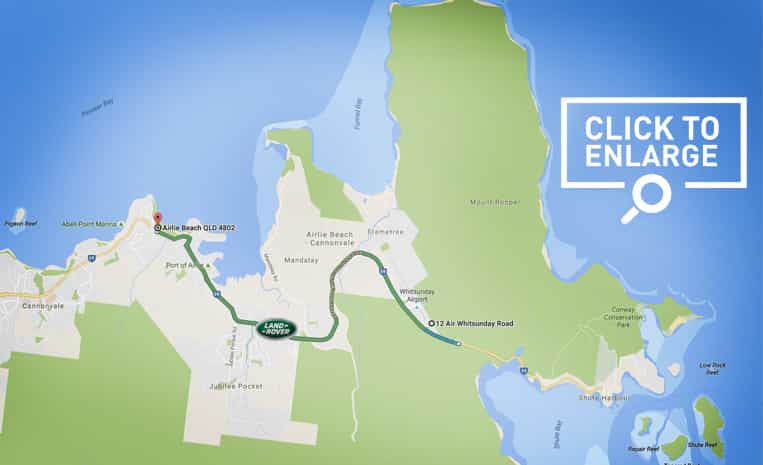 Have you always been intrigued by life on the water, yet never known where to start? Allow us to explain a little about how easy it is to learn to sail in Australia.

Australia is the world's largest island, flanked by the Indian, Pacific and Southern Oceans as well as the Tasman, Timor and Coral Seas.

The Whitsundays are made up of 74 islands spread over almost 300km of pristine Pacific Ocean, off the coast of Queensland, Australia.