Discovery Sport & Range Rover Evoque fuel economy and CO2 figures quoted on this website are based on European testing. Australian figures are expected to be available early 2021.​

Defender 22MY model year is now available to order. Some models of the 21 model year range reflected on this website are no longer available, please check with your local retailer for the latest ordering information.
Please refer to 22MY Specification and price guide for all details.

To enable us to show drive away prices, please select your state. 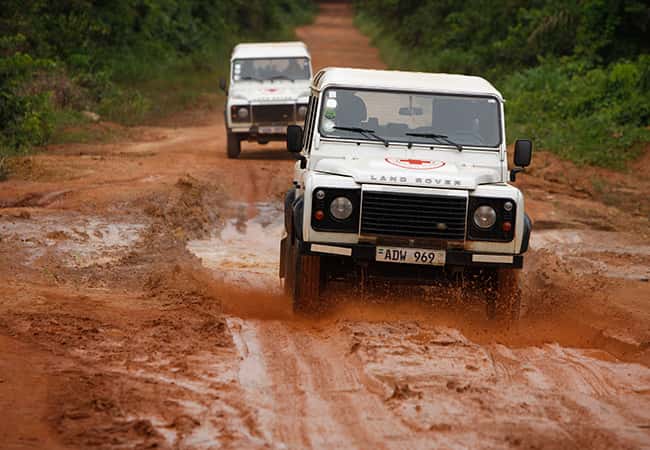 The International Federation of Red Cross and Red Crescent Societies (IFRC) is the world's largest humanitarian network that reaches 150 million people in 189 National Societies through the work of over 13 million volunteers.

Land Rover’s long-standing relationship with the Red Cross began in 1954 when we provided the British Red Cross with a Series 1 Land Rover to use as a mobile dispensary in Dubai.

The relationship was further cemented in 2007, as part of the development of Land Rover's G4 Challenge. Since then its worldwide achievements include the loan and donation of 120 vehicles and the provision of direct help to more than 800,000 people. Globally more than one million people have also benefited indirectly from Land Rover's support for the IFRC, with funding totalling more than £6.4m since 2007.

One of the most influential projects of the partnership was the “Journey of Discovery” expedition in 2012. Land Rover made the IFRC’s sustainable water and sanitation project in Uganda the focus of an ambitious fund-raising activity to complete a 10,000-mile expedition to Beijing, China. This journey was completed by the one millionth Land Rover Discovery, which was built at Solihull, UK, the home of Land Rover. The 50-day journey succeeded in  its target of generating £1 million for the project and raising awareness of the vital work being done by IFRC teams in Africa.

The Australian arms of Land Rover and Red Cross have been working closely together on a multi-tiered support program to reach Australians affected by natural disasters or other emergency assistance requirements.

Since 2010, Land Rover Australia supplied the Victorian and Queensland Disaster & Emergency Services teams with a fleet of vehicles which has been instrumental in the rural recovery projects for a range of natural disasters including locust plagues, floods and bushfires.

The vehicles have been used in the personal support outreach program, visiting people in their homes to listen to their stories and provide them with the support they require to get their lives back to normal.

The second component of Land Rover Australia's support of Red Cross is the Single Incident Emergency Assistance (SIEA) program. This program provides immediate emergency assistance to any person, family or individual whose homes and/or possessions have been destroyed or severely damaged by an incident such as a house fire, localised flooding, windstorm, explosion or other disasters affecting single households.

In 2013, Land Rover extended its global partnership with the IFRC for a further five years, with the aim of providing £15 million worth of support by 2018. This work will contribute to Jaguar Land Rover's overall company goal of creating opportunities through the Global Corporate Social Responsibility programme for 12 million people by 2020.